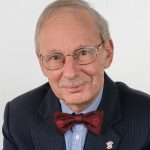 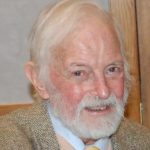 It is with great sadness and a heavy heart that we report the death of Professor Dennis H Wright from a hip fracture and COVID-19 infection. Dennis was a long standing trustee of Leukaemia Busters, serving for a total of 18 years over two separate periods between 1997 to 2004 and 2008 to 2018. He brought a great deal of wisdom to the board of trustees, which together with his gentle yet authoritative manner helped shape the charity’s direction and success in research.

Dennis was born in Felixstowe in 1931. After his school days in Norfolk, he was awarded a scholarship to the University of Bristol where he trained in medicine. He qualified in 1956 and won the gold medal of the Bristol Royal Hospital Board. With an inquisitive mind for understanding the causes and mechanisms behind disease processes, he elected to undertake his national service in Uganda as a pathologist. He spent 8 years at Makerere University in Kampala, where he met and worked with Dr Denis Burkitt on a type of jaw tumour in children that later became known as Burkitt lymphoma, occurring mainly in the malaria belt of Africa. On his return to the UK in 1968, he became Reader in Pathology at the University of Birmingham.

In 1971 Dennis was appointed Foundation Professor of Pathology at the newly opened Medical School of the University of Southampton. In 1973 he was awarded the Paul Ehrlich and Ludwig Darmstaedter prize for his work on Burkitt Lymphoma. He remained Head of Pathology at Southampton General Hospital until his retirement in 1996. During his years at Southampton, his professional interest in lymphoma grew and he became a world expert in the histological diagnosis and classification of lymphoma.

Under his leadership, the department became a centre for excellence in this area where patient biopsy materials from within Wessex, and well beyond, were referred for his expert opinion. In addition to his keen diagnostic skills in lymphoma, Dennis’s academic research into the root causes of lymphoma and the biological processes driving this cancer were always under his scrutiny. He was a founding member and a past President of the British Lymphoma Pathology Group and the European Association of Haematopathologists, and member of the WHO Clinical Advisory Committee on the Classification of Haematological Malignancies.

After retirement, he never lost interest and continued to delve into the causes of lymphoma and its re-classifications over the years. He was Editor in Chief of the much respected Journal of Pathology for 15 years, and played a key role in the publication and dissemination of seminal articles on various disease states and their microscopic or molecular diagnosis. Over the span of his long career, Dennis published numerous original research papers and several books. The most recent, Diagnostic Lymph Node Pathology, now in its third edition was written jointly with Dr Margaret Ashton-Key and his pathologist daughter Dr Penny Wright, is now used widely as an expert reference and teaching guide to the pathological features of lymphoma.

Most of all Dennis was a humanist, always concerned about others and always willing to give his time, advice and help to whomsoever sought it, regardless of age or rank. He will be remembered by many people as one of the fathers of lymphoma pathology along with his affable and friendly manner in carrying out his professional responsibilities. Alongside his many admirable professional qualities Dennis was a keen horticulturalist and had a passion for growing a whole variety of plants and shrubs in his large garden.

Dennis leaves behind his pathologist wife Elizabeth and their two adult children; Matthew an engineer and Emma a doctor, together with six children by a first marriage; Carolyn, Lizzie, Bob, Penny, Susie and Maggie. He will be sorely missed by many friends and colleagues past and present and by his fellow trustees at Leukaemia Busters but will continue to live on through the excellent work he contributed throughout his lifetime.